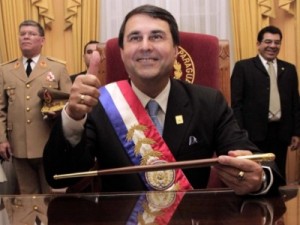 On December 5th, President Federico Franco of Paraguay began a two-day official visit to Miami, invited by local petrochemical companies that are planning to explore oil in the the Chaco region of the South American country.
In one of his interviews Franco stated that Paraguay has the largest oil reserves in Latin America and is looking forward to receiving US investors conduct further studies in the Chaco.  One day before his departure, the president visited the city of Neuland (about 350 miles from capital city Asuncion) and with the president of President Energy Company led the symbolic act of officially beginning the oil exploration in Chaco, in which President Energy is expected to invest $92 Million.
In Miami, Franco met with representatives of President Energy in Miami and noted that the exploration of oil in Paraguay “means a tremendous added  value for [Paraguay’s] economy.” Franco “highly values Paraguay’s potential for energy independence and the its significance to secure an added value from oil and its byproducts.”
He added that “[oil exploration] will open a new area of development for the country, and further enhance what we already have in the agricultural sector and create value with our existing strategic resources.” Franco received details of the latest digital technology in studies of geo-seismology undertaken by President Energy Co. in the territory of Pirity, Boqueron, Paraguayan Chaco.
The senior leadership of President Energy, Peter Levine and Richard Gonzalez, presented the research and methodology that confirm prospects for oil in Paraguay. According to President Energy analysis, there have been identified more than 150 million barrels of high quality crude oil, which can be refined at the PetróleosParaguayos (Petropar) refinery at Villa Elisa in central Paraguay.
Franco, accompanied by two members of his cabinet: Minister of Industry and Trade Francisco Rivas and Minister of Schedules Fernando Pfannl, was given briefings on the technology, industrial equipment and logistics that will be installed once the oil exploration has begun in Chaco. Also joining Franco were Senators BlasLlano and Robert Acevedo.
President Franco met also with the leadership of Brightstar, with whom confirmed their interest to establish their headquarters in Paraguay and assemble 30,000 computers per month.  Brightstar will fulfill the demand of supplying computers to Paraguayan children and the surplus will be exported overseas.   Brightstar is a global company, headquartered in Miami, and is dedicated to computer and cell phone production technology.
Senators Llano and Acevedo both took the lead to introduce legislation in the Paraguayan Congress to promote the Brightstar project.
Spero columnist Peter M Tase is an analyst of Latin American and business affairs.