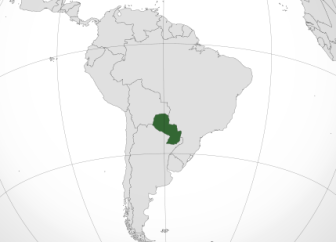 On May 19th, Mr. Cesar Palacios, a seasoned public communicator, shared a few thoughts on Paraguay for the audience of Eurasia Review. The following is a biography and interview of Mr. Palacios.

César Palacios received in 1996 a Bachelor of Arts degree in Communication Sciences from the Department of Philosophy at the National University of Asuncion (UNA); a Post Graduate Degree in University Pedagogy, 2002, from the Department of Philosophy, UNA; a joint Master’s Degree in Communication and Marketing in Universidad Columbia, Paraguay and Universidad del Salvador, Buenos Aires, 2006. He has pursued courses in Cultural Anthropology at the Institute of Advanced studies in Applied Anthropology, Universidad Salesiana de Quito, Ecuador.

Since 1997, he has worked as a television journalist, news anchor, speaker and general coordinator in Channel 13 Teledifusora Paraguaya S.A. In 2004 – 2007 he also served as a Manager of Marketing and communication program within various NGOs: Alter Vida, FM Radio Trinidad which later converted into Radio Viva FM.

From September to December 2008, Palacios served as Press Adviser to the Ministry of Foreign Affairs where he joined as a journalism counselor the first Paraguayan diplomatic corps delegation in the high level meetings organized in the United Arab Emirates, Qatar, Lebanon, Jordan, Syria, considered to be the most important meetings in opening new opportunities and markets for the Republic of Paraguay.

For two years, January 2009 until January 2011, Palacios served as the Director of Communications at the Ministry of Social Welfare, where he developed a series of projects in order to establish a positive image for the institution. Subsequently, since February 2011 to the present, is the director general of the Paraguayan government’s media coordination offices, in the Ministry of Information and Communication for Development (Secretaría de Información y Comunicación para el Desarrollo-SICOM).

In the area of teaching Mr. Palacios has lectures since 1998 in the Department of Philosophy at the National University of Asuncion and Columbia University. Has been a member of the faculty at the Catholic University of Asuncion since 2005 and is currently teaching courses in Public Relations, Leadership in Communication decision making and administration.

Eurasia Review: How would you summarize the Paraguayan Foreign policy, its bilateral relations with the U.S.?

César Palacios: Paraguay has a solid and a sovereign foreign policy. Although after the political impeachment of June 2012, a few doors were closed, this did not mean an isolation for Paraguayan foreign policy, considering that immediately after this regional isolation, many other opportunities emerged in the horizon and Asuncion continues to maintain impeccable its democratic standards and institutional independence in addition to keeping close ties with many European and Asian Countries. In relation to the Ministry of Information (Secretaría de Información y Comunicación para el Desarrollo-SICOM), one of the worst situations was the membership suspension of Paraguayan government news agency, IPParaguay, from the Latin American Union of News Agencies, a fact that was condemned by our office, at the meeting held in July 2012, La Paz, considering that public media such as news agencies should not take political sides and apply certain measures in response to events of this nature. I believe that US – Paraguay bilateral relations are quite strong, in fact, the United States always has supported our government in many sectors and initiatives, especially in terms of education and sustainable development. I think that we should take a greater advantage from the assistance provided by our U.S. partners who play a key role in further strengthening our education, cultural and professional training.